queerguru went shopping this week and bumped into Delphine and Carmela ….known to the world as the (in) famous Calamari Sisters.  They had stumbled into The Toys of Eros looking for sausages to use in their brand new SAUSAGEFEST show playing at The Sage Inn & Lounge all this summer.  They were somehow under the impression that this was a kitchen utensil store and took great delight in showing me how they planned to use all the ‘unusual’ toys.

Here’s a teaser trailer of our hilarious encounter  …… we’ll publish the whole thing when our editor can stop laughing.

The one thing everyone always takes away from P. Town every single summer is a T Shirt that announces to the world that you were lucky enough to vacation here. If you are even luckier you may get a new mate (or two) as well.

queerguru got both when we stumbled on a brand new store called MATE run by designer Paul Nesbit that we, and several others, instantly fell in love with. Take a look and you’ll see why.

Author queerguruPosted on July 14, 2016Categories queerguru.tvLabels 2016, Provincetown Culture
queerguru started his summer 2016 season in Provincetown by losing a pie-eating contest and his dignity at this 2nd Annual Event run by Connies Bakery in the heart of town.

queerguru caught up with Chris Salgardo President of Kiehls Since 1851 when he arrived in P. Town to enjoy one of his (and our) favorite summer highlights …. Bear Week.  We got to chat about much more than that however as we discussed his new book MANMADE, plus  the Kiehls/AmFAR LifeRide that will be passing through town next month, and  his whole approach to help changing the way we look whilst at the same time helping the communities that we live in. 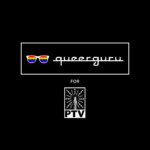 It took a long time for queerguru to finally get a chance to sit down and talk with the fabulous Miss Richfield 1981, and it was so worth the wait. This former beauty pageant queen has been starring in her own shows in P Town every summer since ……well, it seems for ever.  Not only did we get to dish the dirt with the best thing/person to ever leave Minnesota, but Miss Richfield 1981 exclusively revealed in this interview for P.T.V. that Hillary Clinton phoned her first to offer her the VP job but she had to turn it down as she is so busy.

We have not stopped laughing ever since we filmed this as this hilarious fast-talking wickedly funny gal never lets up for a single moment .

Miss Richfield 1981 is appearing all summer at https://onlyatthecrown.com/