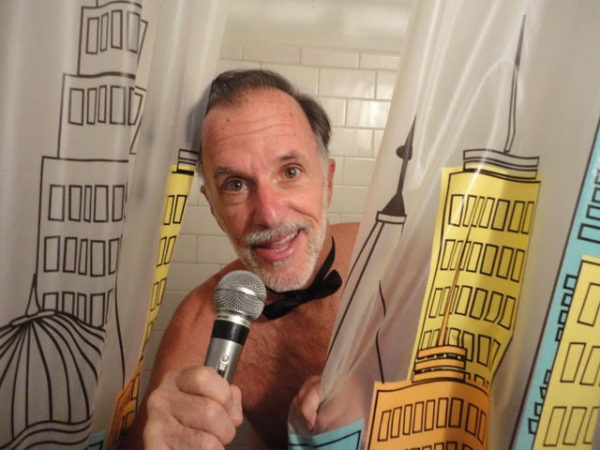 The disarmingly charming Luis Santeiro the out American/Cuban writer who has managed to win over twenty EMMYS (so far), sat down with QUEERGURU to talk about his new Cabaret Show From The Shower To The Stage. He’s found his singing voice and with Musical Director Paul Greenwood weaves some of his favorite sings with a wealth of stories about his fascinating life.

One of his grandfathers was a President of Cuba but the whole family had to leave the country when the Regime confiscated all their businesses and properties. Looking back now at when he arrived in Miami at the tender age of 12, Santeiro’ s memories are positive images of both his old and new lifes.

His first big break came when he became the head writer of ¿Qué Pasa, USA?,  a groundbreaking bilingual sitcom set in Miami’s Cuban exile community that traced the lives of three generations of Cubans trying to make it in their new homeland.   It won Santeiro his very first Emmy too.

His main claim to fame is the past 40 years as a writer on the iconic children’s show  SESAME STREET which has always been known for its progressive thinking on educating and entertaining children.  We naturally had to ask if Bert and Ernie are gay, and Santeiro spilt the beans.

Santeiro is also a very successful playwright, and we finished the interview talking about his latest play that is due to premiere in Miami in the Fall .