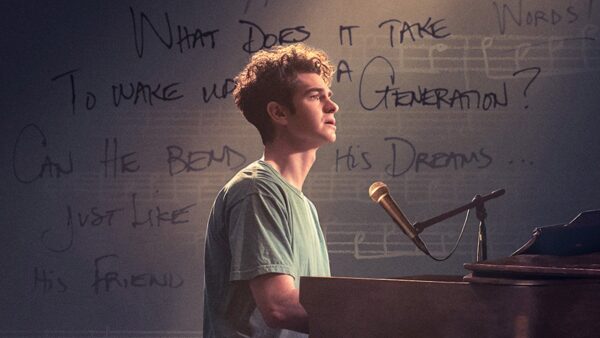 Very occasionally a movie comes along that is actually better than its advance hype.  tick tick Boom is definitely one of them.   The directing debut of Lin-Manuel Miranda (Hamilton) from a script by Steven Levenson (Dear Evan Hansen),  this biopic musical is a love letter to the late Jonathan Larson and Broadway itself.

Larson is the musical genius who created Rent that swept both the Tony and Drama Desk Awards in 1996 and made such a significant impact on Broadway musicals.   None of which Larson saw as he died suddenly of an aortic dissection, believed to have been caused by undiagnosed Marfan syndrome, the night before the off-Broadway premiere.  Miranda is such a perfect choice to tell this tale of the person who set the stage for his own work.

When the movie starts, Larson is approaching his 30 played by Andrew Garfield in a career-best performance (wow,  who knew he could sing like that).  Larson is still struggling to finish a futuristic sci-fi musical he has been working on for eight years. It is about to get its first workshop production,  but he still hasn’t written the crucial second-act solo for a character named Elizabeth that is the show’s turning point. 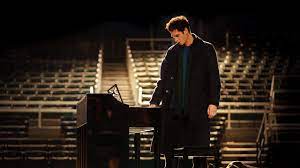 Also even though he has been working as a waiter at a diner, he has no money,  his best friend and roommate is moving out, his girlfriend needs to know if she should accept a job in the Berkshires.  The best friend finally tells him he has AIDS, the same disease that has killed three of his friends, all in their 20s, and is devastating the queer population of Manhatten.

Larson, like many geniuses, comes over as completely self-absorbed and fails to see the personal turmoils of all those close to him.   At least in his favor, he has the ability to change when the penny eventually drops.  He is after all very aware of the larger picture of what is happening in society.  The activist in him explored social issues such as multiculturalism,  addiction, and homophobia in his work.

The latter made many believe Larson to not only be gay but that his death was caused by AIDS: and the truth about both will actually surprise many people.

There has always been talk of how Larson’s work influenced future generations, but in the film, we also see how he was grateful for the help from those before him like Stephen Sondheim (Bradley Whitford). (He would later win the Stephen Sondheim Award). The two of them developed a mutual respect for each other’s work which was a very refreshing discovery.

This film is based on the musical of the same name so it has its fair share of staged musical numbers.  All critics were sworn to not give away any spoilers BUT what we can say is that there is a crowd scene set in the Diner that you need to watch very intently so you miss any details at all.

Garfield shows Larson’s sheer passion for mainly his work but also life too.  He is a complex character but with such a charismatic personality that is so infectious that somehow allows him to get away with much of his unsocial behavior.  He is also a master of reconciliation and the one with his gay best friend Michael (the talented Robin de Jesus)  will have you reaching for your kleenex.

This movie is all about the period of time when Larson reacting to his Agent (Judith Light) telling him to write ‘ what he knows about’  writes his own version of La Boheme. He would replace the luscious splendor of Puccini’s world and be replace it with the coarseness and noise of his part of New York in what we know now as Rent.  This film will have you going to back to rewatch that all over again.

If Garfield doesn’t get his second Academy Award Nomination for this, I’ll eat my hat.  He so deserves and it will be a perfect tribute to Larson himself too.

The movie is now streaming on Netflx