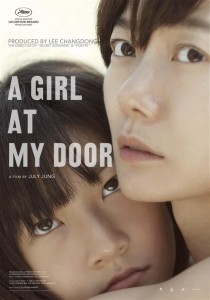 Yeong-nam doesn’t seemed too overjoyed to be the new precinct Chief of Police in a remote fishing village far from Seoul. When she has a briefing with the local area Superintendent soon after she arrives we learn that there has been an undisclosed ‘incident’ that has prompted this unwanted transfer. Now she is advised that if she maintains a low profile in her new position for the next year, then she will be welcomed back into the metropolitan force.
She plans to get through her sojourn there with the aid of copious amounts of alcohol but unlike the other bored local residents who do the same, she can still fully function without anyone suspecting her lack of sobriety. She is actually a very efficient and conscientious police officer and so she sets about tackling out some of the village’s problems that everyone else has chosen to ignore.
There’s a perpetual drunk old woman who insists on careering somewhat dangerously around on her motorized scooter, and she and her pushy son Song Sae-bycok use every spare moment they have beating up his teenage step daughter Do-hee.  The girl’s mother left the family years ago, so now she is the punching bag and the recipient of all the domestic abuse. 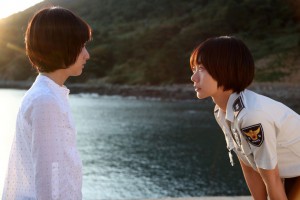 After the Police Chief steps in one day to save her from yet another beating Do-hee takes a shine to Yeong-nam,  and it ends with her making a friend of the daughter and an enemy of the father. Song Sae-bycok is the one who provides a string of illegal immigrants as cheap labor for the village which has no local young men to do all the manual work. In return, everyone turns a blind eye to his despicable behavior and his drunken rampages.

One day after the old lady is found dead on the beach crushed by her motor scooter, things very quickly take a turn for the worse for Do-hee,  so she seeks refuge with Yeong-nam and encourages her to become a surrogate mother. This idyll is interrupted one night by a visitor and we learn exactly why Yeong-nam had been banished. When Do-hee also puts two and two together, she gets jealous of suddenly having competition for Yeong-nam’s affection.

Song Sae-bycok also works out what is going on just at the same time he has been arrested for beating up one of his workers badly. He uses this new information to deflect the Police’s interest away from him and onto Yeong-nam herself,  and it looks like she will be kept behind bars when a panicking Do-hee concocts a story about her take on recent events which backfire on everyone. 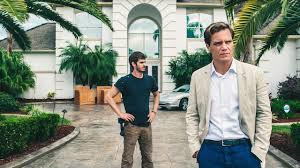 This rather wonderful introspective psychological thriller unfolds at very measured pace with a pitch-perfect nuanced performance as Yeong-nam by Doona Bae (better known to us for ‘Cloud Atlas’ and ‘Sense8‘).  For the most part her emotionless demeanour gives very little away and adds to the uncertainty of how this drama will play out.  She is aided by an extraordinary performance by Kim Rae-Son as Do-hee who transforms from a desperately abused simple girl into a conniving and manipulative young woman in front of our very eyes.

It is an inspired first feature from writer/director July Jung who is fearless in tackling many social issues that seem even more catastrophic in such a small close knit community like this, but she does so in a restrained and well-thought out manner and is careful not to just let it all simply lapse into melodrama. It’s an extremely impressive debut from a country that rarely tackles story lines where the protagonist is LGBT, and deservedly so she picked up three nominations for her efforts when the movie premiered at Cannes Film Festival including one for a coveted Queer Palm Award.