It’s difficult to write about this text, mainly because it defies categorisation and scrambles the logic of what we understand by the noun, “novel”. Whilst the front cover proclaims it is a novel, the inside blurb calls it ‘a mash-up of love story, pornography, art criticism, literary appropriation, and essayistic meditation, operating on the peripheries of a pathological discourse’. It is therefore a novel in the true, essential meaning of the word: something new, full of novelty. As such, it is also something for which no existing criteria of assessment can really be applied. It represents such a radical departure from what we’ve come to expect from a novel that the established ways of reviewing novels become obsolete. It demands we produce new criteria of judgement – those based on what this work itself represents. (This is what Jean-François Lyotard called the ‘postmodern’). Like Bridget’s previous work, Texts That Shouldn’t Be Read Out Loud, Treatment is concerned with both the production and the subversion of fiction.

Structured around forty numbered ‘text-treatments’, the book alternates between and explores several narrative passageways, one of which follows a gay couple, Allan and Allen, as their relationship collapses. Some passages, in dialogue only, recount scenes of sexual exploitation as an older man coerces or pays young boys to strip for his camera. Scattered throughout are short essays about the art of Yves Klein, or meditations on the body, along with myriad other scraps and fragments, all of which amount to a vertiginous reading experience. A lot of it is staggeringly beautiful prose – “the shadowed subtleties of his mouth” – and thought-provoking, torturous description of trivia, such as the activities of a household fly transmitting germs, but if you’re looking for a story, or a narrative in the traditional sense keep well away. This is experimental and pretentious in the best possible way, both those terms being positive assets in my humble opinion.

Some passages were excruciatingly difficult to read, in a way I haven’t experienced since I first read Dennis Cooper in the 90s, or the work of Richard Grossman. Visceral, violent writing that disturbs you because that is its very intention. Not for the faint-hearted, this novel will challenge you or infuriate you depending on your expectations of what fiction should be or do. Personally, I loved it. 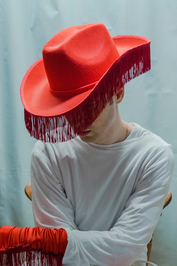 Adrian Bridget is a writer and publisher. He is the author of the collection ‘TEXTS THAT SHOULDN’T BE READ OUT LOUD.’ His first novel—’Treatment’—was published in 2019. In recent years he has taught at the Royal Academy of Art, The Hague, and had his work read and performed in the UK and The Netherlands. He lives and works in London.