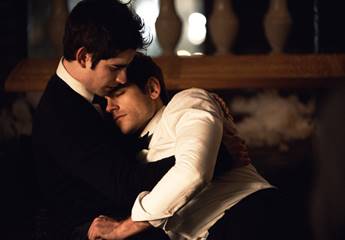 Like most LGBT movie critics, queerguru is privileged to see many new films that have been launched at Film Festivals throughout the year, and that (hopefully) should be surfacing in a movie theater near you or on a Streaming Platform in 2016 : here is our pick of the best of them.

Late into the night he is Danger Dave, but when this chatty highly-opinionated dj turns off the mike after his gay radio show in Buffalo NY is over, he reverts back into shy Dave who is someone who has a hard time accepting himself, let alone interacting with others. When the movie opens his show has just been cancelled and he is saying goodbye to Chris his assistant, who also happens to be his soon-to-be ex-boyfriend who is moving out of the apartment they share.  It seems like there is really no hope and no life for our hero beyond the studio, but luckily for Dave (and us) all is not lost as we soon find out in this quirky and utterly charming wee tale. It’s a first feature from Don Scime its writer and star.

Brit filmmaker Jake Witzenfeld’s impressive and heartwarming documentary thankfully settles down after a somewhat uneven start to become an intriguing snapshot of what life is like for gay Arabs living in a trendy suburb of Tel Aviv today.  He follows three extremely engaging best friends in their early twenties for 18 months through 2013 – 2014 when tensions between Gaza and Israel flared up yet again.

Filmmaker Maya Newell has followed her successful Australian TV series “Growing Up Gayby” with this new full length documentary that takes a look at the lives of four different children whose parents all happen to be gay.  It is evidently a subject that is dear to her heart having grown up with two mothers herself. The timing could not have been more perfect as the Australian Government are currently coming under pressure for still refusing to even tackle the whole subject of legalizing same-sex marriage, thus continuing to deny these families the legal recognition they need and deserve.

Actors Dan Via and Gerald McCullouch respectively wrote and directed this rather entertaining movie, adapted from their own successful stage play, about this May-December relationship with more than one twist to the plot. This very engaging wee independent drama is very much a labor of love for its principal players, and is rather a neat little gem.

Like most successful gay couples, Tony and Leo seem to be an unlikely pair. They have been together four years now and Leo thinks that this Christmas he should propose to Tony as he knows this is what he wants. The trouble is that Leo still has a commitment phobia which is put even more to the test the next day when Tony moots the idea of them adopting a recently abandoned premature baby. This refreshing new gay drama written and directed by first time filmmaker Michelle Clay intuitively deals with love and loss, and how we can finally see in ourselves what others have seen all along.
6) “Akron”
=
Written and co-directed by newbie filmmaker and Akron native Brian O’Donnell,  this a wonderfully refreshing coming-of-age story that simply captures all the passionate excitement of two very fresh-faced wholesome kids in the glow of first love.  Full marks to O’Donnell and his co-director Sasha King for both making the boy’s scenes of intimacy tastefully discreet, and secondly for ensuring that when the going got tough, even though voices got raised and heated, they avoided taking the usual cliched route of making a melodrama out of it all.

This smart and incisive drama written and directed by newbie filmmaker Arthur Allen, (who also takes a starring role), plays out very well indeed.  The chemistry between the two middle-aged handsome gay men (the other is played by Jake Street) is very tight and touching, and their scenes together are emotionally charged and very passionate. It is however the bible-loving conservative father who has to run the gamut of all his emotions, who holds our attention most of the time. It is an impressive and powerful performance from Chuck Sigars a comedian and actor in this his first movie role.

This second feature written and directed by Hong Kong native filmmaker Ray Yeung is a very perceptive take on the clash of two very different versions on what was once the same culture, and their opposing views on sexuality and self-expression. It’s a very fresh and convincing plot, extremely well written, that has some very neat twists, that allow these two strangers to enjoy some very unexpected happiness in their touching and tender romance. The number of LGBT movies with Asian based story lines that get distributed on a global basis add up to no more than a mere handful, which is a great shame.  When they are as good as ‘Front Cover’, and have a ‘message’ that audiences will not just relate too but really enjoy too, they so deserve to be seen .

In this refreshing coming-of-age drama from American/Korean filmmaker Josh Kim the two boys sexuality is of no real consequence to anyone at all.  With the help of his excellent young cast, Kim ensures that this tale of social inequality is told without sinking into melodrama or dragging out any of the usual cliched stereotypes. The compassionate fraternal relationship is particular touching and makes this heartbreaking story such a sheer joy to watch.

Gillian Armstrong’s captivating documentary on the Australian three-time Academy Award Winning Costume Designer the larger than life Orry-Kelly is a nothing less than a sheer gem. This flamboyant and gregarious openly gay man had a great zest for life (and especially for alcohol) and was adored by all of Hollywood’s leading ladies of the day as well as several of the men, including his boyfriend of many years, Cary Grant. We persuaded the filmmakers to give us a sneak preview, and we so hope that this glorious glimpse of the old Hollywood glamour will now get to be shown in the US and other global markets.
1) “Those People”
This is one of those rare exceptional debut movies from an inspiring new filmmaker Joey Kuhn that seems to be the payback for having to sit through far too many indifferent indie films every day.  This tale of unrequited love is both tender and tough, as it is when are in your early 20’s and you have been silently wrestling with it for the past 15 years. Kuhn however has a very mature approach to treating this story that is partly based on his own life. and he ensures that we are completely engaged from the opening credits to the very end . Every year queer cinema discovers a fresh new voice that is capable of taking the medium to a higher and different plane, our feeling is that Joey Kuhn could just be one that fits this bill for 2016.