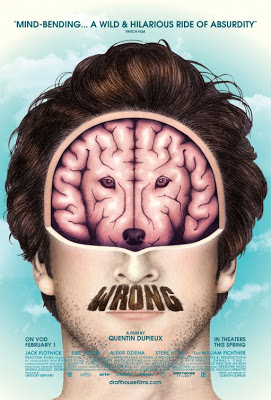 If you read this blog regularly then you will know what we really love are movies that are so far out there, and that my creed is actually the weirder the better. And this delightful absurdist surreal comedy called ‘WRONG’ is a perfect example. Written, directed, photographed and edited by Quentin Dupieux (who also did the music too!) the story essentially was about a loner called Dolph who wakes up one morning and discovers that Paul his dog has disappeared.

Starting with his very odd next door neighbor who’s in denial that he’s a jogger(!), everybody Dolph (Jack Plotnick encounters in his search for the dog has a twisted story of their own.  Not only has Dolph lost his only friend but the palm tree in the yard has mysterious turned into a pine tree.  So he tries to distract himself from all his distress by phoning a new pizza company who have just mailed him a flyer to have an in-depth discussion of whether their logo of a rabbit on a motorbike makes any sense. He seeks solace by going into his office to work, even though he had been fired three months earlier. The office incidentally has a constant indoor rain shower that does not deter his co-workers getting on with their soggy work. 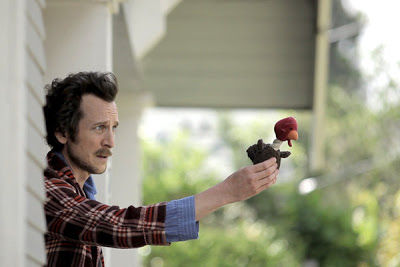 The dog’s disappearance is not an accident at all but he has been kidnapped by a guru named Master Chang (William Fichtner) as part of his master plan to spread the gospel about his theories of the powers of psychic energy between dogs and their owners. Still with me? There is  very stiff competition as to who is the most bonkers of them all …. Master Chang is up there, but so too is the Pizza Company Receptionist (Alexis Dziena)  who leaves her husband to move in with Dolph after sleeping with him just one night (although actually the man in her bed was Viktor (Eric Judor)  the gardener who looked nothing like Dolph).  Confused? Don’t be.  It does all make sense (albeit a very weird one) in the end.
We unhesitating loved it all 100%.  It was also the first time this week that the hard-bitten Sundance Industry audience broke out into applause as  the end credits rolled.  I’ve read since then that there is the possibility of a subtext to the whole thing i.e. reverse the word dog, and maybe Dolph’s search is something more spiritual.  I’m not sure at all if I buy that theory, but regardless of that this wonderful wacky real treat of a movie will definitely be one of my top favorites from this Festival.
P.S.  This review is republished from our SUNDANCE 2012 Blog, and now that the movie has finally made it into Art Houses (and V.O.D.) we revisited it again ….. at O Cinema Wynwood ….and we stand by every word that we wrote 15 months ago.  Jack Plotnick the wonderfully talented actor who was Dolph (literally) did a Q & A via Skype after the Show and managed to dispel the GOD theory, but nevertheless told us that Mr Dupieux  was more than happy for us to read anything we wanted into the subtext.