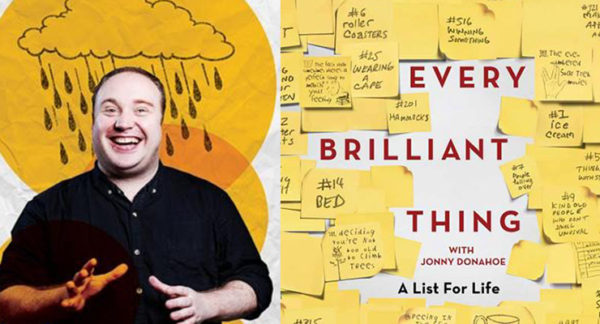 Every Christmas Frank Capra’s 1946 classic movie It’s A Wonderful Life is dragged out for another airing on TV.  Lest you have never seen it (!) its the  story of  George Bailey who is so depressed by the fact that everything is going wrong that he seriously contemplates taking his own life only to be talked out of it by an Angel.  Why suicide should be even considered a suitable topic for the holiday season is a little surprising, but it also the central plank of Every Brilliant Thing the movie of one-man-show that deals with a young man whose life is plagued by his mother’s suicide attempts that is being aired on HBO on December 26th.

What we should quickly add is that like Capra’s movie, although it deals with the very serious of depression Every Brilliant Thing is far from being sad, and as odd at it may seem, it is in fact the funniest take on this very difficult subject that we have ever seen.

Brit comedian Jonny Donahoe acts out a story he co-wrote with Duncan MacMillan that starts with him as a young boy 0f 7 relating how he dealt with his mother’s first attempt to kill herself. Left completely alone by his rather remote father his coping mechanism was to start compiling a list of the greatest sources of pleasure in life and leaving itemized pieces of paper of this for his mother to find.

What Donahoe had done as the audience had shuffled in to take their seats was to distribute these same pieces of paper and when he called out a number at random, then whoever had that would have to read it out loud. Not only that, from this intimate crowd that surrounded him all sides he would pounce on audience members to play characters who featured in his story. The first one he calls on has to play the vet who had been called to put down Sherlock Bones the family dog, which was the boy’s first experience with death.

Donahoe’s nameless boy grows up into something of a loner and leaves home to go to University. At the same time he is trying to build up enough courage to ask an equally shy girl out on a date, his mother is making more suicide attempts. He succeeds in getting himself a girlfriend just before his mother finally succeeds in killing herself.

By now the List has grown to enormous proportions and moved on from simple things like ‘ice cream’ and ‘Star Trek’ to ‘Falling in Love’, and suddenly the list that he had started to help his mother deal with her life and cure her depression even though she would never read it, now takes on great importance to him as his own life starts to fall apart.

Every Brilliant Thing started its life in an English theater back in 2013 and has since enjoyed extremely successful runs over the world, including a three month sold-out stint at NY’s Barrow Street Theater.  This piece, which is quintessentially British with its dry sardonic humor, has been directed for television by award winning filmmakers Fenton Bailey and Randy Barbato.

It is however essentially the performance of the disarmingly charming Donahoe, for whom this is obviously a passionate project, and who so quickly has the whole audience rooting for him, that makes this rather inspired production the sheer joy that it is.  In fact we would happily add ‘Every Brilliant Thing’ to our own list of brilliant things for this festive season.