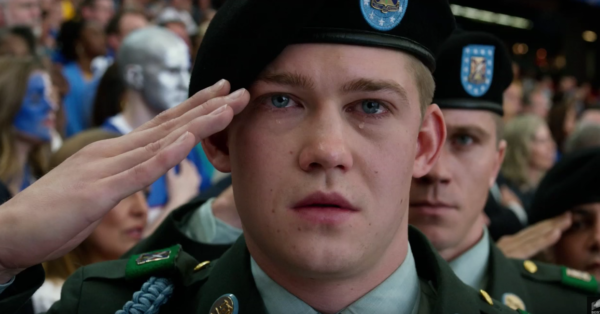 There are very few filmmakers who consistently produce sure-fire hits with every movie they make like the two-time Oscar winner Ang Lee, but even he is seems is not completely infallible.  His latest one boasts the very latest experimental technology that affects how we see it all but somehow it seems like that it is at the expense of the movie itself which ends up being a confusing mess.  Sadly Billy’s Long Halftime Walk takes him, and us nowhere.

Billy (Joe Alwyn) and the other members of Bravo Company his army platoon are being feted for the day by the Dallas Cowboys after becoming unexpected heroes whilst serving in Iraq. The Army have arranged this propaganda tour, and it seems that everybody is wanting to exploit the soldiers for their acts of bravery, including a Hollywood producer (Chris Tucker) who is tagging along promising to land them a lucrative movie deal.

The day starts out with Billy’s sister Kathryn (Kristen Stewart) pleading with her brother to apply for a discharge so that he will not have to return to the Front Line.It’s partly from sisterly concern, but also due to the fact that he had to enlist after he came to her rescue after her boyfriend had dumped her. Billy is confused, and his state of mind is not helped by all the PTSD flashbacks he has once all the manic activities start in the Stadium.  All the extravagent over-the-top spectacle of the half time Show complete with firework display serve as the centerpiece of the movie but come at the expense of the plot which seems to start, stutter and then start again and never following through on most of the strands. For example Billy finally loses his virginity to a Cheerleader who is happy to help out because she knows he is being shipped out again, but then that story line fizzles out too.

What exasperated it all further was that apart from Alywn and Stewart, Lee managed to get uncomfortably stiff performances from the usually reliable Steve Martin as the red-faced megalomaniac Cowboys owner, and also from Vin Diesel as a mystic Army Sergeant who loves to send the men into battle after they one by  one declare their love for each other.

The story that Lee obviously intended to show of how the realities of war actually measure up to the unreal perceptions held by people responsible for starting them or the greater public home, is what makes this intriguing movie worth sitting through. That, and the breakthrough performance of an exceptionally talented Alywn.  If the end result was from any other filmmaker, it would simply escape attention, but coming from Lee, it is a sad disappointment.