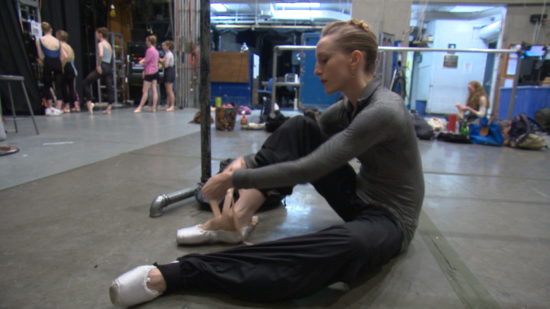 The sheer power of documentary is nowhere more apparent than in this excellent affectionate profile of the end of the remarkable career of Wendy Whelan on the eve of her retirement from the NY City Ballet after an unprecedented 30 years with the Company. For non-balletomanes and non-Americans whose education never included the opportunity to know about this superb ballerina,  by the time the final credit roles you end up feeling that through this window into her life you are not only in total awe of her extraordinary talent but also grateful to have learned of what an exceptional woman she is too.

The documentary from producer-directors Linda Saffire and Adam Schlesinger filmed over a couple of years starts with Whelan very concerned that at 46-years-old that her dancing years must be drawing to a close.  As the Company’s principal dancer and biggest star she is becoming aware that although no-one has addressed the issue directly with her, they have now started offering major roles in the Program that were always hers to other dancers.  This on the eve of her first every surgery to repair a damaged hip, which after enjoying an injury free career to date which would finish most people off, but not Whelan. She may emerge from the hospital on crutches, but she pushes herself, and her physical therapists really hard, determined to be back on stage dancing as soon as she can.

Whelan is remarkably candid about her reluctance to even accept that her career may be over , and says more than once ‘If I cannot dance, I would rather die.‘ It seems more than a tad dramatic to the casual observer, but when you see her electrifying beautiful performance on stage, you can totally see where she is coming from. Having established most of her success creating new roles from young up & coming choreographers such as Alexei Ratmansky and Christopher Wheeldon, Whelan now decides to develop her own contemporary dance program called Restless Creatures which she plans to tour with before her official return to the City Ballet. However for once in her life she has to admit defeat and accept that she is not recovered enough to undertake such an arduous ordeal.

Then when the phone call comes from Peter Martins the Ballet Company’s boss for a long overdue meeting, and as he doesn’t suggest her retirement, she does and after dreading the inevitablity for so long, suddenly realizes that its actually tremendous weight of her mind.  The Company commissions both Wheeldon and Ratmansky to create new works for Whelans Gala Final Performance, and instead of devising pieces that maybe take into her account of her recent surgery and/or age they choreograph ballets that for Whelan to excel and show again why she is such a star.  She literally brings the house down on this emotional packed audience who shower her with roses and endless standing ovations when the Performance is over.

Whelan has a sinewy body and is a strong dancer that always pushed her body beyond the normal limits. Of all the interviews with her colleagues and friends, none were more poignant than those with her dancing partners.  There were older ones she had ‘outlived’ and the younger ones who currently dance with her, each endorsing the concept that what you learn about working  together is from passing technique from one generation to the next.  As each of them lined up to testify how they loved Whelan and working with her, but however  it was the sight of all the kids from the Ballet School who were allowed to peek in at her rehearsing her last role sitting there is such awe, that told the best picture of all.

Whelan went on to actually take the delayed Restless Creature of a very successful tour and is now carving out a niche in this new phase of her career, and no doubt she will get her wish and go on dancing until she dies.  Something we should all be grateful for.