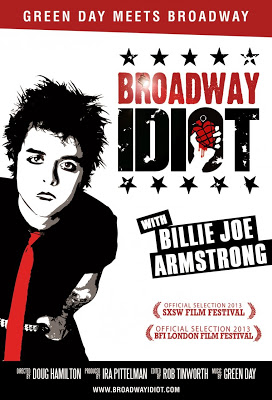 In 2007 director Michael Mayer won his Tony Award for ‘Spring Awakening’ the exhilarating rock musical based on an obscure 19th German play that re-defined Broadway musicals for a new a generation.  It was a hard act to follow but Mayer had the inspired idea to develop a new Musical based on the punk group Green Day’s mega hit iconic album ‘American Idiot’ which was essentially a kind of rock opera about an anti-hero called Jesus of Suburbia.


The three members of Green Day were extremely cautious of the whole concept and in fact didn’t give Mayer and his team permission to actually proceed until they did a mini-production of their take on a few of the songs. Billie Joe Armstrong the band’s songwriter and frontman not only immediately endorsed the Show, but from then on actively encouraged the project and got involved wherever he could. 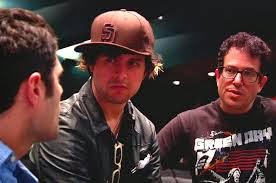 This documentary from filmmaker Doug Hamilton covers the whole process of the creation of the show right through to the point that it is a critical and commercial hit on Broadway and the once reluctant Armstrong is now making occasional appearances on stage playing one of the lead characters.  It’s an intoxicating ride and a great backstage story watching this show in the making. Whilst they are working from existing songs (and a few more from another Green Day album) Tom Kitt the musical collaborator must make them fit within the framework of the show and when he nervously previews them he is relived to hear that Armstrong think the arrangements are even better than his own.
Meanwhile when  Green Day is then nominated for some Grammys, Armstrong insists that he and the whole cast perform together at the Awards Concert. They are sensational which is perfectly fitting as that very night they have learnt that their tryout run in LA is to end as it has been confirmed that the Show is definitely destined  for Broadway.

OK.  Confession time.  I had heard of Green Day BUT had never knowingly listened to their music. Now I know that they are not only one of biggest rock groups around today, but that they write and sing some amazingly political-charged powerful songs about wanting to follow their dreams. By the end of the film I could appreciate not just the energy of their operatic like album and why Mayer could see so much in it, but also the fact that Armstrong was such a disarming charmer of a man too.
If you like these behind the curtain backstage stories then you will find this totally fascinating, and if like me, you have such fond memories of The Who’s ‘Tommy’ then you will really relate to this too.

P.S. The Show ended up winning two Tony’s in 2010 and the Best Cast Album Grammy in 2011 : it ran over a year in Broadway and then toured the world … literally …. after that.