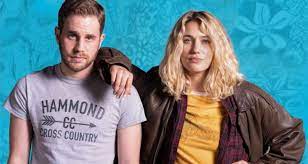 Broken Diamonds is a new mental health drama that is the sophomore feature from director Peter Sattler, from a script by Steve Waverly.  Well done on every level, it will still make disturbing viewing to many whose lives have been touched by similar situations.  And even to those whose families have at some time been on the precipice of a life-changing scenario like this.

To paraphrase the famous quote by film star Bette Davies  “Growing old is not the feint hearted‘  …. nor is dealing with mental health

As the story starts Scott (Ben Platt) is about to leave his job as a waiter to finally go to Paris to fulfill his dream of being the next Ernest Hemingway.  He’s actually at his own leaving party when he gets the news that his father has passed away unexpectedly which will mean that his plans may have to be delayed.

The death means that Scott will now have to step up and replace his father as the main caretaker for Scotts older sister Cindy (Lola Kirke), who suffers from schizophrenia.  To make matters worse, when Cindy hears about her father’s demise she lashes out at another patient in the hospital where she lives and gets herself ejected.

There is a delay of two weeks before Cindy can move to another facility so Scott has no alternative but to take her home to his cramped one-room apartment.

The reading of the father’s will discloses the fact that he left the house jointly to both siblings so Scott needs to get Cindy to signing papers to sell it.   The alternative is to have her declared that she is not competent to make such a decision, so he can proceed anywhere.  And all this is to be achieved within the one week he has left before he goes to Paris.

Cindy on the other hand is determined to prove that she can now live independently and begs Scott to help her get her first-ever real job.  Even in the interview process, it’s clear that she is unable to interact with other people on a socially acceptable level which just frustrates both of them even more.

Cindy, who calls herself Sheena when she is well, can only follow the voices in her head,  Her therapist confirms to Scott that all the medication cannot remove them, but they can make the voices quieter.   Kirke gives a compelling performance as an unhappy woman who in her more ‘sane’ moments is aware that she is on a  path of self-destruction.  Her interactions with Scott also make him deal with issues in his childhood which he still harbors as being the one his father, in particular, had neglected whilst Cindy got all the attention.

The Tony award-winning Platt gives a pitch-perfect performance as the brother who must decide whether he can in all conscience still go to Paris, or if he will need to put his own life on hold.

Broken Diamonds also reminds us that how uncomfortable society feels when someone who is sick acts out in public.  It’s as if sometimes we are more concerned with our reputation and public perception than with the well-being of our loved ones.  Sattler handles it all with great perception and although the drama may be tough to watch at times, it is nevertheless quite compelling.