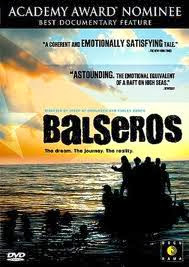 After the USSR fell apart, the Soviets could no longer prop up the fragile economy in Cuba and in August 1994 after a group of dissidents failed to hijack a Ferry in Havana there were unprecedented near riots in the City. Castro addressed the unruly mob and to quell their anger he announced that the authorities would no longer stop anyone who wanted to leave Cuba.
Thus started an unprecedented mass exodus of some 50,00 people who literally took their lives in their hands by taking to the high seas in the most flimsiest of make-shift crafts made out of any material they could lay their hands on.  Most of them were totally un-seaworthy and never made the 90 mile journey to Miami and to freedom.
With the situation totally out of hand and countless hundreds (possibly thousands) drowning en route, President Clinton put his foot down and announced that the US Coastguards would start patrolling the Strait and detain all the rafters they came across and take them to a holding camp in Guantanamo Bay.
Filmmakers Carles Bosch & Josep Maria Domènech followed a 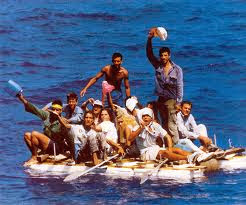 few of these ‘balseros’ (Cuban rafters) as they manically rushed around Havana scraping their rafts together and then followed their subsequent internment at the ‘Refugee Camp’.  They included Guillermo who had not seen his wife and daughter since they had legally immigrated to Miami five years previously; Mericys who bought her ‘raft’ parts from her earnings as a prostitute; and Rafael who just wanted his dream of ‘a house, a car and a good wife’ which he believed he could only get in the USA.
They spent a year in Guantanamo before they were granted Visas and flown to the USA, and once they were in Miami penniless and totally unprepared for their new lives, they were at the hands of a Catholic Charity.  They were unceremoniously dispatched all over the country where the Charity had outposts and where there were plenty of available jobs. With no command of English the new immigrants used to tropical weather now faced starting all over again in Nebraska, Connecticut, New Jersey in somewhat isolated communities. This is where the magic of their new life started to look less like a dream and more like a nightmare for some of them.
Rafael, one of the few who had relatives in the US, moved in with his Uncle in Miami on the other was the opposite and when he realized that he could never survive in such an urban environment, upped and went North too.
The third part of the story is when the Filmmakers return to catch-up with their original subjects and sadly most of them are completely disillusioned with the reality of their new lives. Only Guillermo seems to have found lasting happiness and a sense of serenity whilst the rest have strings of broken relationships and financial worries, and one is now peddling drugs to keep afloat.
Made as a series of TV programs and then developed into a Documentary movie which was subsequently nominated for an Oscar in 2004 it is a stunning eye-opener of the realities of the thousands of Cubans who wanted a different and better life.  There is one telling clip when a young unmarried couple stuck in the middle of Connecticut are fighting because ever since they arrived they have worked day and night to scrimp and save for the ‘American Dream’. The girl screams out, ‘we may have been poor in Cuba BUT we had fun and saw life …..this is NOT living’.
I really needed to see this movie especially as an immigrant myself, albeit one who arrived from the UK legally via Virgin Atlantic, and who lives in Miami amidst so many Cubans.  Whilst I appreciate that there are many more stories about other ‘balseros’ from that time, and since then, that had much happy endings, it does also serve to remind us all that the dreams of the Rafael’s of the world come at a price, which sometimes is way too much to pay.

Unmissable .  (available on DVD via Amazon)