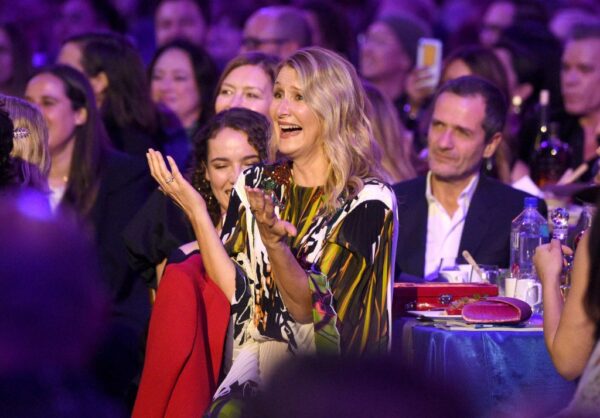 The most gayest ‘happening’  from all the movie award ceremonies this season happened at the Independent Spirit Awards in Santa Monica .

PARKS AND RECREATION alum AUBREY PLAZA came on stage to celebrate LGBTQ representation in film, declaring, “While we do have some amazing queer films nominated tonight, we wanted to shine a spotlight on some of the gayest moments in other films that you may not have realized were gay.”  She then introduced the GAY MEN’S CHORUS OF L.A., who started off their performance by citing some of this year’s biggest moments and ended up being an hilarious tribute to LAURA DERN.

We’ve included the wonderful video at the bottom of this page ……but first, wait there’s more.  Of Course.  After the video went viral (and Laura Dern claimed she loved it even more than winning an Oscar next day) producer Quinn Colman decided to may it even gayer.

With DJs the Perry Twins he created  a dance version of the song penned by producer Greg O’Connor and Jordan Firstman which has been released today, and it has made our weekend in the Queerguru Office.  Sorry neighbors, we’ll stop  playing it soon.

The remix is now available now on Spotify, Apple Music, Amazon Music, and other streaming services. And 100 percent of proceeds benefit GMCLA and its various outreach programs, such as the Alive Music Project and Arts for Incarcerated Youth Network.  Here’s a wee taster …… and then go buy , it will put in a good mood for at least the rest of the weekend.