Whilst not massively enamored of poppers myself –  they smell of old socks and give me a headache – my housemate’s a big fan, they’re delivered in bulk. So, during the first lockdown, when we were all trying to find ways to keep entertained at home, we booked tickets for Adam Zmith’s online lecture on the history of poppers, with comedy interludes by the inimitable Dr. Sharon Husbands. The pair eagerly partook of the hard stuff throughout and when they encouraged the audience to inhale, I removed two little brown bottles – labeled Oink! and English – from our freezer where they’re kept for extra freshness, and we began huffing away as Zmith delivered his socio-historical lecture and Sharon delivered white trash, post-Kristevian belly laughs.

Zmith clearly spent his lockdowns productively, developing that lecture into this engaging and well-researched account of exactly how queer poppers are, how they became an emblem of a certain seedy, irresistible aspect of gay life, and how, according to Zmith, they are key to any real sense of a queer utopia. From their humble beginnings in mid-nineteenth century, introduced as a source of relief for angina sufferers, to their ubiquity within gay life, from dancefloor to bedroom, Zmith recounts it all with lusty relish. He introduces us to Antoine Jérome Balard of Montpellier, France, the man who started it all when, in 1844, he passed nitrogen fumes through amyl alcohol and discovered that inhaling the resulting pungent vapour caused his face to redden and dilated his blood vessels, lowering his blood pressure. At the time, he couldn’t think what earthly use it would be, but twenty-two years later, a young Scotsman, Thomas Lauder Brunton, used the vapour to relieve his angina patients’ pain. Pretty soon, it was being sold in small glass vials that you ‘popped’ to release the fumes.

Recounting poppers’ history is interesting enough in itself but understanding their place in history is where Zmith excels. Using episodes in the history of poppers, he explores, imagines and extrapolates on, among other things, gender norms, popperbators, science fiction, and the AIDS crisis. He adorns his book with gems of stories –  like that of Roland Chemist on Praed Street near Paddington Station, London, who sold 185,700 ampoules of amyl nitrite in one year, compared to Boots Chemists in Piccadilly who sold around 288 ampoules. We learn about W. Jay Freezer the man who marketed poppers to gay men specifically – establishing the magazine Drummer to serve as a platform for advertising the product to its hedonistic readers. He dreamed of poppers being sold alongside shampoo and nail polish remover in supermarkets. Then, of course, AIDS hit, and anything associated with pleasure-seeking were shunned. For a while, amyl nitrite was considered the cause of what became known as HIV.

There’s a rich diversity of ideas, facts and musings here. Alongside an account of popperbating  and a section on queer utopias as imagined by sci-fi writers, there’s a chapter on the police raids in 1986/87 on London’s iconic queer heritage public house, The Royal Vauxhall Tavern, to seize the poppers being sold there. The seven uniformed officers wore unnecessary surgical gloves in protest at their provocative prophylactics, Lily Savage, who was onstage at the time, gave the Old Bill a Scouse mouthful and told the crowd to riot, earning herself a night in the cell.

Inbetween the longer chapters there are short, italicized interludes which give a more personal expression to Zmith’s prose.

There’s no doubt that Deep Sniff is a passion project for Zmith. That it’s also an impressive intellectual endeavor that soberly celebrates poppers’ place in queer history is no mean feat. To sniff amyl nitrite is to join the Village People, hang out at the Mineshaft, or be an extra in Cruising. Deep Sniff acknowledges all this without shying away from poppers more problematic aspects. All told, it’s quite intoxicating.” 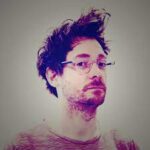 Author Adam Zmith was the recipient of the London Writers Award 2019-20, and is the author of several shortlisted and published short stories. He is also one of the producers of The Log Books podcast, winner of Gold in the Best New Podcast category at the British Podcast Awards 2020