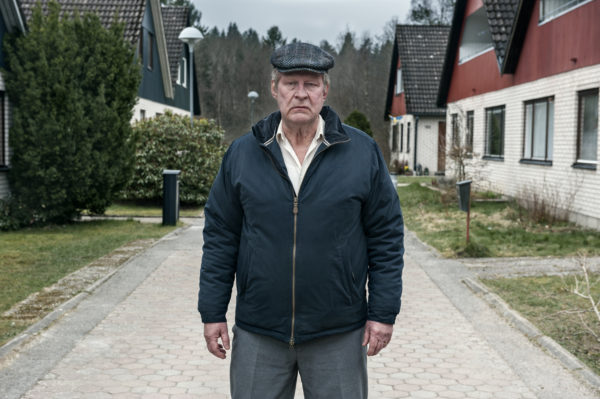 There is something about being a cantankerous old curmudgeon like Ove (the rather wonderful Rolf Lassgård) that one sometime secretly admires, for all the wrong reasons naturally. Every day he patrols his small suburban Swedish neighborhood removing bikes in his path, reporting illegally parked cars and even throwing old shoes at the stray cat who torments him.  He is such a figure of hate that the homeowners association voted for him to be replaced as their Chairman, which made him even more bitter.  Then one day when a new neighbor accidentally runs over his mailbox, Ove finally really blows a fuse.

He has just being laid off from his engineering job after 47 years, and is still mourning his wife Sonja (Ida Engvoll) and when he makes his daily visit to her grave in the cemetery he promises that he will join her very soon.  The trouble is that it turns out that he makes a hash of every single attempt to take own his life, and thus actually becomes something of a running gag in this rather charming dramedy.  It turns out that his new neighbors the pregnant Parvaneh (Bahar Pars) and her two daughters, and her somewhat helpless husband Patrik (Tomas Almborg) are the ones who will eventually humanize this grumpy old man.

Ove has always been socially awkward, and we see that  in flash backs to his small-town childhood, and his young adulthood when he first meets the vivacious Sonja and loves her even more than he loves his precious Saab cars. Seeing them together so happy gives us the clue that he was not always the miserable old git that he turned into.  His passion for injustice in those days came from when he started nurturing a lifetime of hate for bureaucracy which he blames for the loss of his childhood home, and he likes to be a thorn in the side of ‘the white shirts’ as he calls them.

Despite his deep rooted suspicions and all his initial reluctance, Ove slowly starts to thaw after the determination of a very persistent Parvaneh who insists of involving him in her family, which will eventually help the old man even see and greet the rest of the community once again with some warmth and affection.

Written and directed by Hannes Holm who adapted it from the best-selling novel of the sam name by Fredrik Backman, this delightful heartwarming dramedy quickly became the 5th biggest box-office hit of all time in Sweden. This universal story will easily find a global audience too as the relationships between Ove and the two women in his life and how they shaped him, are such a joy to watch unfold.  A great deal of the credit goes to the veteran actor Lassgård, and to Filip Berg who played Ove as a young man, and also to Engvoll, and particularly Pars with her infectious joie de vivre that made the unlikely savior she played so utterly convincing.

A Man Called Ove is a cautionary tale of how many of us could turn out to be unsociable cranky old fools if we become obsessed with ruining other people’s lives rather than enjoying our own.  Hopefully we will all find happiness just like Ove did before it becomes time to join our departed loved ones in the next life.