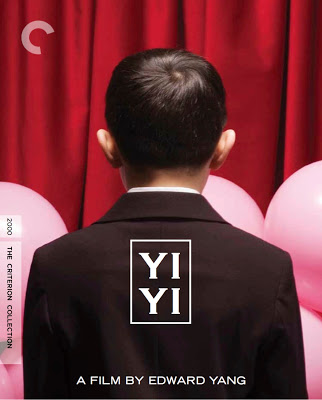 This extraordinary Taiwanese epic length family drama
that spans the everyday struggles of three generations of a very colorful
middle class family kicks off with a wedding and ends three hours later with a
funeral.  The chaos of the wedding with
the photo of the bride and groom hung upside down and the reception invaded by
the screaming jilted ex girlfriend sets the perfect pace for this fascinating saga.
The Yang family’s matriarch has a stroke and goes into
a coma and the family takes it in turns to talk to her to help her regain consciousness.  Son-in-law NJ is an electronics executive in a
company which is looking for a financial angel (or mug) to rescue it from
teetering into bankruptcy.  His wife Min Min has her own busy career and she realizes that when it comes to her turn she has nothing
to say to her comatose mother and eventually seeks flees the apartment altogether
to take refuge in the Temple to ‘find herself’.  Then there’s Ting Ting their teenage daughter too who almost strays and loses
her virginity to her best friend’s boyfriend, a skinny kid called Fatty (!).
But its little Yang Yang the 8 year old son who is left to his own devices most
of the time who shows most indications that he will figure the bigger picture of
life out possibly before the rest of his family.
At the wedding NJ runs into the first big love of his
life who he has not seen for 20 years since he stood her up.  There is obviously still a great deal of
attraction on both their parts, and that kind of throws NJ off course somewhat.
It takes all of this well-meaning thoroughly decent family
some time to realize that not only what each of them had been thinking that
they were missing out on wasn’t really exactly as they imagined it to be.  And the life that they had ended up was
really the one that they would choose if they did in fact start all over again.
Edward Yang’s remarkable movie that earned him the top
Director’s Award at Cannes Film Festival in 2000 and countless other awards
almost seems like a soap-opera at times yet it is far less melodramatic and hysterical than that,
and the plot developments are  very real indeed. The movie engages your complete attention from the start and
never lets you down at all.
If Mr Yang has a ‘message’ in the film, then it’s
probably the one that he uses his 8-year-old namesake to  say to his father ‘ I cant see what you see, and
you cant see what I see.  So how can we know
more than half the truth?’ Exactly.
When ‘Fatty’ takes Ting Ting out to the cinema on their
first date, he tells her ‘movies don’t resemble the world we live in, they expand
it.’  When they are as good as this they
do just that, and more.
It took me some time to get around to seeing this one , I would
recommend that you put it on your Netflix right now.