The opening scenes of this new documentary …. with its perfectly wonderful title …. reels off a whole list of extraordinary facts about the small town of Branson in Missouri that you are almost tempted to book a flight there immediately. 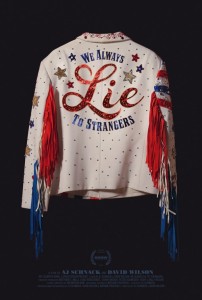 With a local population of just over 10000 all year round, they get a remarkable 8 million visitors a year to see some of the 150 shows (they have more theater seats than Broadway) and they take in some several billions of tourist dollars every single year. Why it became the ‘redneck’ show capital of the world in the first place was never made that clear, but it maintains is position as the leading resort BECAUSE all the entertainment sticks to the same identical formula.  All family owned, wholesome and squeaky clean, not a hint of profanity or even a glimpse of a bare breast, lots of singing and dancing with hundreds of costume changes.  What they lack in real talent (!) they make for up with sheer enthusiasm and boundless energy  …. and God’s blessings naturally.

The movie shot over 5 years, focuses on four distinct storylines …..  the multi-generational Presley Family(NO relation to The King) one of the pioneers of Branson’s show business; the Lennon family who include TV’s famous Lennon Sisters from the 60’s; the Timocos whose brand new show is struggling as it clearly fails to live up to its name (The Magnificent Variety Show); and single gay dad Chip Holderman who gingerly puts one foot out of the closet to quickly jump back in and slamming the door shut.

attention, but they are not always that well served in this overly long movie which deserved better editing.  We are teased with snippets of brassy twice divorced Elisha as her first job back on stage may not last that long especially as the bosses find her (wonderful) rapid sarcastic wit that trips out of her potty-mouth too much to handle.  Then there is Bill Lennon who talks about how he dreads the family being shunned by polite society en mass because they have the effrontery (!) to dare to be Democrats in this fiercely Tea Party Territory (‘we worried that our daughter would never be voted Prom Queen‘).  And the impressively determined Raeanna who married into the Presley Family and accepted that women, rarely on stage in their show, play a background role in their businesses, so she upped and became the local Mayor instead. She gave a very convincing performance of a rare Republican politician with a both a heart and a brain.

The most moving story of all is Chip’s.  At the beginning of the documentary he is having a clandestine relationship with Ryan another singer/dancer who states with a grin on his face …’there is large gay community here, and then there is the Bible Belt  …. whoever had the dumb idea of sticking them together!’  Chip’s situation deteriorates quickly when his ex-wife reveals his sexual orientation to their two children in a very negative manner and their new stepfather rants and raves at him with the vilest homophobic taunts and threats. However a couple of weeks later when Chip has his son over on a visit he notices bruising on the boy and reports this to Child Protection Agency who, with the Police, question the step-dad. No charges are made, but the God-fearing bully suddenly ‘forgives’ Chip for his homosexuality, and life gets back to normal. Well not quite, having felt so threatened about losing his shared custody, Chip dumps his boyfriend and goes totally back into the closet.

Branson is clearly struggling in this tough economic climate and so Shows are failing, but apart from this it seems like this is a land where time has stopped still.  When way before TV schedules were filled of shows such as ‘America’s Got Talent’ these people really believed they all did and were destined for show biz careers. Even four year old precocious brats. Ever night for two hours on stage, life for them is all sparkling and wonderful, even though the glitter and sequins are stuck in all the wrong places. You can even find some barely recognizabe old faces in the crowd, like poor Andy Williams who must have had more facelifts than Joan Rivers.

This is unquestionable a  real treat of a movie despite its imperfections, but I’ve now seen enough of Branson to know NOT to book that plane ticket after all.  Ever!

P.S. The title comes from the fact that two old timer mountain people were overheard spinning yarns simply to put tourists off the scent as to what life really is like.

P.P.S. This is not really a gay movie in the true sense of queer cinema BUT I have included it here as Skip’s story … the most poignant in this movie ….. needs to be heard.