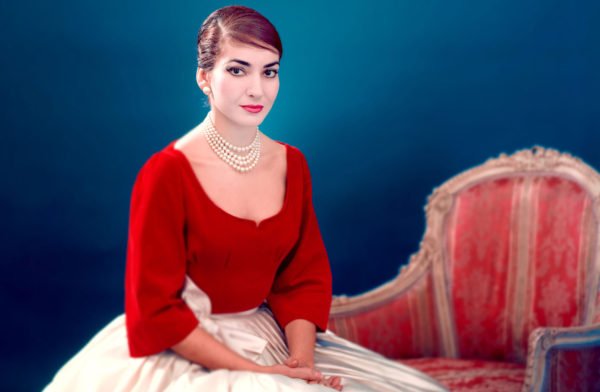 The sheer beauty of Tom Volf‘s enthralling documentary on the legendary diva Maria Callas is that he puts such an emphasis on the music and her magnificent voice.  By using only her words from interviews, letters and videos whilst Volf touches on Callas’s life that was more tumultuous off-stage, he never lets that override this affectionate and flattering profile of her enormous contribution to the world of Opera.

The film deals with her life chronologically from her birth in NY to the family’s enforced stay in Greece when WW2 broke out and her pushy mother’s persistancy to get her into one of Athens leading music academies.  When she started to get her first singing roles in Opera houses in France and Italy and get an early taste of fame, it was very soon tarnished by notoriety of being ‘difficult’ which would follow her entire professional life.

However Volf allows us to listen to Callas singing some of her favorite arias in full which reminds us that, difficult or not, there was no mistaken the absolute majesty of that voice.

As far as personal relationships, asides from her very public affair with the shipping magnate Aristotle Onassis that she carried on with even after he married Jackie Kennedy, Callas seems to have a full life  surrounded by the likes of Omar Sharif, Grace Kelly, Luchino Visconti, Vittorio De Sica and even having a  brief fling with director Pier Paolo Pasolini.

It’s been 40 years since her death so whilst this excellent documentary will certainly please all of Callas’ die hard fans, it will also serve to introduce her to millennial music lovers who so deserve to learn what they missed out on.  After all La Callas La Divina was a life force the like of which we will never see again