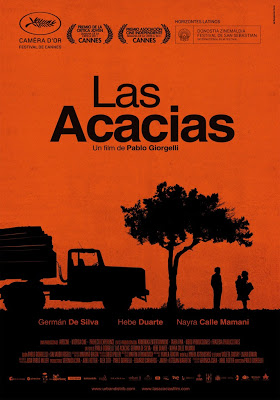 Ruben is a solitary man well suited to the interminable loneliness of being a long-distance truck driver.  In the opening minutes of the film we see him setting off on a journey from Paraguay back to Argentina with his long trailer loaded with logs and seemingly content to settle into his rigid regime of his life on the road.  At Asuncion he stops and waits for a passenger that his boss has asked him to give a lift to  Brazil en route, but what he had  failed to mention was that Jacinta would be travelling with her 5 month old baby Anahi. 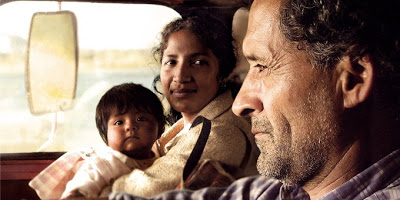 Ruben is far from pleased and quietly verging on anger and he makes no attempt to help Jacinta as she
climbs into the truck weighed down with all her heavy bags.  The journey
starts in a deafening silence, which seems like neither of these quiet
strangers will break.  Ruben does
eventually ask her tentative questions about the whereabouts of the baby’s
father but gets rebuffed and they relapse into silence again until the next
attempt.  It is in fact the baby’s crying
that eventually breaks the ice.

Then, very gradually, the two, both damaged people in
their own way, open up and start to get to know and even eventually like each other.  By the time it culminates in the final scene
where Ruben drops them off with her relatives start her new life, he agonizes
before eventually asking Jacinta if he can see her again.  Trust me by that point we all want to know the answer, which is neatly ambiguous but gives Ruben (and us) some hope.
This is a wee gem of a film with its sparse dialogue
and the most simplest of stories which completely engages you from the moment their
journey together starts.  Director (and
co-writer) Pablo Giorgelli beautifully conveys the claustrophobic space of the
truck’s cabin compared to the vastness of the open countryside that by some innovative
camera work in this his debut feature movie.
It’s the two actors however that really make this come alive with the such
understated subliminal performances as they give so little detail of their
story but we end up feeling that we know them well enough to be invested in
their futures.  And I am very hesitant to
even mention it, BUT I will confess the baby got to me too … and people who know
me personally, will know this is no mean feat.
It picked up Awards at the Cannes Film Festival but
that’s not the main reason why you should see this film. It’s a slow burner of a
delight that unfolds at a leisurely pace that ends up leaving you totally
entranced.