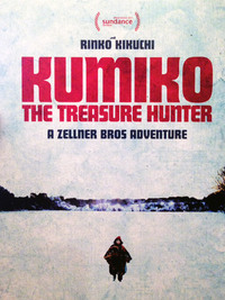 Kumiko a disheveled 29 year old real loner ekes out a living in Tokyo as a lowly office secretary before returning each night to the cramped messy apartment she shares with her pet white rabbit.  She has discovered an old VHS tape (in what we assume is a dream sequence) and now spends every waking moment replaying it over and over again.  It’s a very fuzzy copy of the Coen Brother’s movie Fargo and she keeps returning to study the scene in which Steve Buscemi buries a briefcase stuffed full of cash in a deserted snowy field in the middle of nowhere. 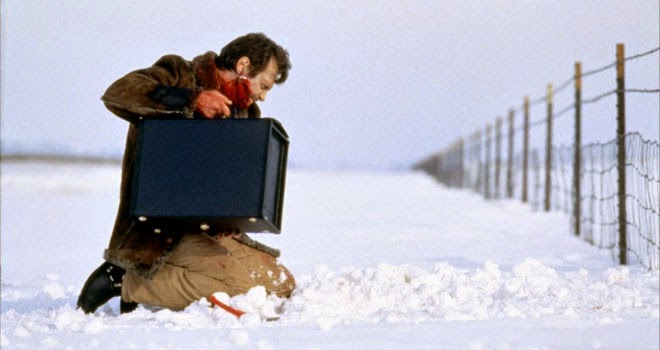 Every time she views the clip she freezes the tape so that she can measure the distances in between the fence posts in the field so that she can work out precisely the spot when the treasure is hidden.  One day she attempts to steal an Atlas from the library as it contains a map of the town of Fargo in Minnesota, and when caught by the Guard she explains that she is on a ‘mission’ like the Spanish conquistadors who searched for treasure in America. The poor befuddled man looks at Kumiko thinking that she must be bonkers.  By now, we know that she is for sure.
When her Boss pisses her off again at the Office, Kumiko exacts her revenge on him by stealing the company credit card to buy a plane ticket to Minnesota in search of the cash which she is convinced belongs to her.  First however she has to set her rabbit free which is not as easy as she thinks but totally hilarious (for us) to watch.
When she lands in the U.S. without a scrape of luggage and barely speaking any English at all, Kumiko hasn’t the faintest idea of what to do or where to go.  Relying totally on the kindness of strangers she somehow makes it onto a Greyhound bus heading north, but when this breaks down, she gets out to walk along the near-desolate highway in a snow storm.

At first rescued by a sweet old lady, and then later by an exceptionally caring policeman who takes her under his wing although he hasn’t a clue what this lone Asian woman is doing wandering the wintery streets wearing just a bedquilt over her city clothes. His idea of helping is taking her to the local Chinese Restaurant where he hopes the owner can translate for him as he thinks all Asians speak the same language.
The surprising ending is as bizarre as the rest of this wonderfully absurdist comedy and finishes the whole ridiculous movie on such a high note.  This third movie from brothers David and Nathan Zellner, by far their best yet, is very loosely based on a news story from 2001 when a young unknown Japanese woman was found dead in a snowy field in Minnesota. How the Zellner’s overworked vivid imaginations converted this into to their outlandish tale is hard to fathom, but this ridiculous oddball story makes for compelling viewing if your tastes veer to anything remotely ludicrous.
Rinko Kikuchi (Oscar nominee for ‘Babel’) is completely beguiling as the solitary young woman who has lost all sense of reality as her blinkered vision is set firmly on her extraordinary obsession. Perfectly dead-pan, her performance is pitch perfect and a joy to behold. David Zellner not only directs the movie that he co-wrote with his brother, but plays the benevolent Minnesota cop who os so clearly out of his depth dealing with this alien traveller.
Beautifully photographed, this rather sad tale may baffle you at times, but will keep you intrigued until the very last frame.