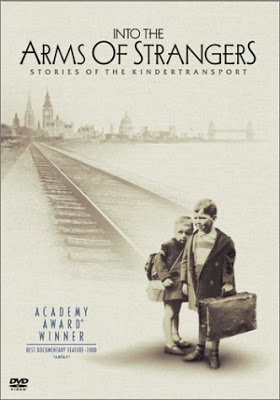 After the German Wehrmacht invaded Austria in March
1938 and annexed it as part of the Third Reich, Hitler’s S.S. introduced their oppressive ant-Jewish laws within a matter of weeks.  Very soon thousands of Austrian Jews (and other political opponents) were rounded up and ‘disappeared’ and each day the terror and violence increased and the whole thing escalated and exploded
after the devastation of ‘The Night of Broken Glass’ (‘Kristallnacht’) when businesses, homes and synagogues were either ransacked or burnt to the ground
and another 30000 Jews were arrested.

A Delegation of Jewish Leaders appealed for help to
the Neville Chamberlain the British Prime Minister and amongst their requests
was that his Government permit the temporary admission of unaccompanied Jewish
children and give them safe harbour.  He agreed and Parliament passed
a Bill, which although imposed some conditions, but allowed this to happen.  The same plea was made to the US Government
but a similar Bill was sadly defeated in Congress.
Within days the first batch of some 200 children from
Austria & Germany (and later Czechoslovakia) arrived scared and bewildered
on a boat in Harwich to be allocated to unknown foster parents.  Most of the children spoke little or no
English and they not only had to adapt to an alien culture but in non-Jewish
households too.  Between 2nd
December and the outbreak of war on September 1st 1939 some 10000
children were saved in this way thanks to a network of brave and determined people, some of whom on the German side were later sent to Concentration Camps.
This remarkable Oscar Winning Documentary made in 2000
is the story of some of the survivors, most of whom never saw their
families ever again.  They retell of the
heartbreak of being forced to leave their own homes, and never really appreciating then that
this was the ultimate sacrifice that their parents could have made.  Just to see these now elderly people relate
how devastated they were when the war broke out and the letters from back home
stopped coming for good is heart breaking.
Being in the UK wasn’t all perfect especially for the older boys who were
interned when hostilities started.  But after one boat load of them being
deported to Australia almost sank, public and political opinion changed
significantly and most of those same young men joined a special division
of the British Army and fought as soldiers for the rest of the war.
As time fades, our history should not, and
well-documented and graphic witness accounts like this are vital to maintain an accurate
record to remind us all of the sheer scale of man’s inhumanity to man.  Some 1.5 million
children (Jewish, gypsies, disabled etc) were killed in the Holocaust, but this
is the story of some 10000 that luckily survived.

P.S. This is the second Oscar Winning Documentary from Director Mark Jonathan Harris . In 1997 he won for ‘The Long Way Home’  : the story of the post World War II Jewish refugee situation from liberation to the establishment of the modern state of Israel.