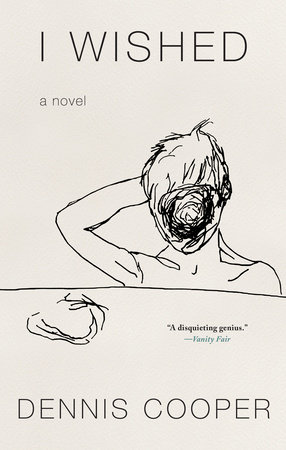 is one of the most anticipated books of 2021. It is Dennis Cooper’s first novel in a decade and is described as ‘his most open and personal work to date’ by Soho Press, and ‘his most surreal, disturbing, vulnerable work yet’ by Vogue. According to Kirkus Reviews, I WISHED ‘…expands the possibilities of the novel form with daring and vulnerability…’

For those who have been engaging with Cooper’s other novels, specifically the George Miles Cycle (Closer, Frisk, Try, Guide, Period) published between 1989–2000, I WISHED explores a recurring motif and a familiar subject matter: the author’s intense relationship with his friend and muse George Miles, a boy living with bipolar who tragically took his own life in 1987. What immediately stands out in I WISHED is the vulnerability with which Cooper explores his relationship with Miles for the first time. Unlike the George Miles Cycle, which is at times ruthlessly violent, mischievously playful and at times outright confusing, mysterious, even murderous, I WISHED is where we finally see the controversial author with all his vulnerabilities, traumas, dreams, and wishes out in the open. Although the book has been categorised as a novel, it is an amalgam of fiction and nonfiction, and there is a range of narrative voices deployed from ‘fairy tale’ and fantasy to confessional realism, reflecting on the realities of loss, love, trauma, uncertainties, and loneliness. The main question with such a book, from a so-called cult writer such as Dennis Cooper is: Would this book stand on its own as a literary piece? Would readers who aren’t necessarily familiar with Dennis Cooper’s mesmeric persona, tragic muse, controversial blog, and other creative outputs (including film and poetry), find the book absorbing and important, or as Cooper wonders in the opening section, ‘only semi-interesting to read’?

Perhaps, most interestingly I WISHED serves not necessarily as a closure for the George Miles Cycle, but as an entry point into the large oeuvre of one of the most innovative writers working today, for unlike most of his other novels, there’s an uncharacteristic absence of shocking and unbearable violence, and in fact, when one reads I WISHED, these raging scenes from his other books make even more sense. As Anne Carson points out, rage can stem from grief: Why are you full of rage? Because you are full of grief. And indeed, how is it possible to write about such unsettling loss and grief that follow you around all your life without creating disruptions in narration, status quo, and morality? Is it even possible to write about loss – especially queer loss, grief and mourning – in a linear, traditional, and safe manner? It is this impossibility, this unbearableness of grief that makes it much more tangible, relatable, and believable in a difficult and disruptive work.

One of the most artful aspects of I WISHED is Cooper’s use of extended metaphors to evoke the guilt and regret that sometimes accompany grief and loss, when after losing a loved one, one tearfully and uselessly keeps thinking, ‘I could’ve/ should’ve done something to save them…’ One stunning instance is a volcanic crater being sculpted as an artwork by the land artist James Turrell – who at times becomes one with Cooper himself. The volcanic crater anticipates and mirrors the crater in George Miles’ head after he shoots himself in the mouth. This then speaks and accuses Dennis Cooper of being a ‘not good enough friend’.

As with his other novels and indeed with his poetry, Cooper has reached the famous ‘goal’ that Baldwin set for every writer… write a sentence as clean as a bone. I WISHED is brimming with ‘clean’ yet striking syntax and descriptions. Here’s just one example from the heart-wrenching FINALE (1976):

I love him so much that I’m nothing but that. Everything else I feel and do is like a habit or a doomed revolution.

Unlike the majority of Cooper’s novels, which are experimental, most of I WISHED is literary realism. There are many palpably tender and beautiful scenes between Dennis and George, both from when they met as young boys, and later on when they became lovers in their early twenties. The chapter titled THE HEART IS A LONELY HUNTER, referencing a film adaptation of McCullers’s classic novel, is one of the most beautifully written pieces of literature on innocent young love and connection, it’s the story of how George and Dennis first met, and how deeply they formed a connection as kids that affected and in so many ways defined them both throughout their lives.

To reduce I WISHED to a memoir about loss, trauma, and grief would be an unforgivable crime against literature. While the inspiration for the book comes from a place of loss and trauma, it is an astonishing work of art that poses the unsettling but necessary question of whether it is truly possible to write about loss and do it justice. I WISHED articulates grief and trauma in a way that is not sentimental, and even though its tragic tale might make the reader weep, the reader can still rejoice in the beauty of its innovative imagery and ideas. With this book, more than with his others, Cooper has done what Eliot says every great poet must do: universalising specific emotions. Cooper’s suffering is particular and unique, but the way he has rendered it in I WISHED is deeply familiar, humane, and universal.

Dennis Cooper was born on January 10, 1953 and grew up in the Southern California cities of Covina and Arcadia. In 1976, he founded Little Caesar Magazine and Press, which he ran until 1982. In 1985, he moved to Amsterdam for two and a half years, where he began his ten year long project, The George Miles Cycle, an interconnected sequence of five novels that includes Closer, Frisk, Try, Guide, and Period. His post-George Miles Cycle novels include My Loose Thread, The Sluts and God, Jr. Other works include the short-story collections Wrong and Ugly Man, poetry collections The Dream Police and The Weaklings, as well as the recent Smothered in Hugs: Essays, Interviews, Feedback, and Obituaries.
Dennis Cooper currently spends his time between Los Angeles and Paris

Golnoosh Nour is the author of The Ministry of Guidance and Other Stories. Her poetry collection Rocksong will be published in October 2021 by Verve Poetry Press. Her work has also been published in Granta, Columbia Journal, and Poetry Anthology amongst others. Golnoosh has performed her work across the UK and internationally. She teaches Creative Writing at the University of Reading. She’s the co-editor of Magma 80 and the anthology Queer Life, Queer Love forthcoming with Muswell Press.