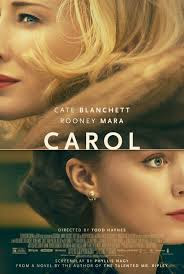 For his 6th feature film  queer filmmaker Todd Haynes returns to the 1950’s and re-visits the theme of repressed sexuality that he captured so brilliantly in his Oscar-nominated “Far From Heaven” in 2002.  Last time he worked from his own script, but this time around British/American playwright Phyllis Nagy has adapted Patricia Highsmith’s controversial novel “The Price of Salt” that had been originally published in 1952 under a nom-de-plume because of it’s ‘scandalous’ lesbian content.
Highsmith based the story on her own life and had in fact been working as a Sales Clerk in the Toy Department of a large New York Store exactly like Therese Belivet (Rooney Mara).  In the movie Therese, a rather quiet ‘loner’, is feeling less than festive even though she has been made to wear her Santa Claus hat as part of the Christmas spirit.  She is distracted one day by the sight of a beautiful elegant socialite who is looking for a Christmas gift for her young daughter. Carol Aird (Cate Blanchett) is a vision personified exuding a natural air of confidence in which she radiates, and by the end of their brief encounter, Therese is totally smitten with her. As Carol absent-minded leaves her gloves in the store, Therese seizes as an excuse to send them back with a personal note. 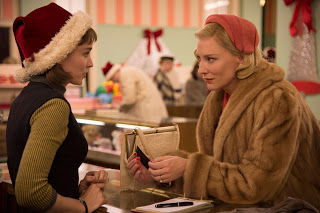 The ruse works and elicits a date for lunch the following week. The moment the two of them sit down in a restaurant, it is clear that they are worlds apart. It isn’t just an age gap, as they also come from totally different classes and backgrounds, but yet both women are immediately completely at ease in each other’s company.  Carol takes the lead as Therese is shy and introverted and clearly a little out of her depth, and the wooing is so subtle that is hard to spot. Luckily however Therese does realize what is going on, and without a moment’s hesitation, she accepts an invitation to visit Carol in the house in the country at the weekend.

Carol has explained that she and her husband are going through a divorce at present and then asks Therese if she is serious about her boyfriend Richard (Jake Lacy) “will you like to marry him?”  To which Therese quickly backs “I barely know what to order for lunch”.

It signals that both are free and therefore available to whatever 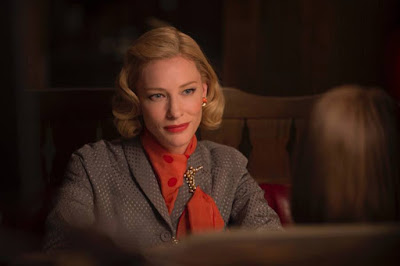 may develop here, but before they can even think of where/how that maybe, their quiet Sunday in the country together is interrupted by Carol’s husband Harge (Kyle Chandler) unexpectedly showing up. An almighty row ensues when a very jealous Harge realizes that Therese is probably Carol’s latest conquest, as from all the accusations flying it is revealed that the reason for the impending divorce is that this is not the first woman Carol has pursued.  He, however, has not given up and is still trying to salvage the marriage.

The day ends badly with both women barely talking, but two days later Carol phones Therese to apologize for her behavior and asks if she would like to go on a road trip over the coming Holidays. Alone at last away from the prying eyes of people they know they eventually cement their relationship physically when Therese allows her older suitor to seduce her. The peace they find is soon shattered when they discover that Harge has paid a detective to spy on.  He is determined that if he cannot have his wife back then he will present evidence to show her ‘immoral behavior’, which will persuade the judge not to allow her any access at all to their child.

Despite the fact that the socially unacceptable subject matter was considered so repugnant at that time, it is treated here not just sympathetically but actually with more than just reasoned tolerance. Harge’s anger with Carol and the fact that Abby (Sarah Poulson) her previous lover now functioned as her best friend and confidante, was much more about his loss than the fact that he had been replaced by a woman. 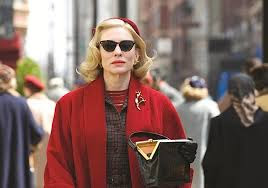 Blanchett, in a breathtaking performance that puts all her other roles to date totally in the shade, imbues Carol with a sophisticated nonchalance and sheer confidence that only ever slips when it’s something to do with her child that she loves more than life itself, particularly whenever faced with the real possibility she may actually lose her. Her final glance at Therese before the credits roll alone is worth an Oscar! She fits the role as perfectly as she does the stunning wardrobe that designer Sandy Powell has provided (and for a possible 4th Best Costume Oscar too).

When the movie premiered at Cannes Film Festival the jury was divided over the Best Actress Award which in the end went to Mara for her exquisite performance as the introverted shopgirl who finds her feet when she finds Carol.  It was a worthy winner, but nevertheless, this movie is very much Carol’s: the story is told from her perspective, and with such a sublime inspired layered performance from Blanchett,  she will quite rightly have the edge when this movie starts collecting the many awards it is destined to win.

It is a phenomenal faultless movie from Haynes impassioned direction to the cinematographer Edward Lachman’s intriguing photography that often showed one of the people in a conversation, and not forgetting Carter Burwell’s powerful soundtrack.  It is very rare to see a movie with such great anticipation and end up realizing that it actually far exceeded all our high expectations. Carol is one such movie, and so deserves to be seen much more than just a mere once.