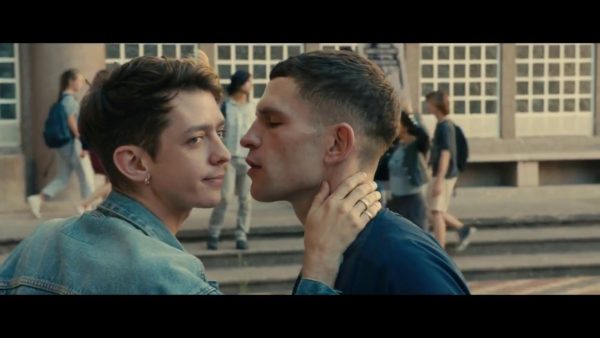 If David France’s Oscar nominated ‘How To Survive a Plague‘ is recognized as the seminal movie on AIDS in the US, then Robin Campillo’s stunning new masterpiece BPM (Beats Per Minute) is undoubtably Europe’s candidate for the title.  His sprawling and somewhat harrowing tale that centers on the ACT UP group in Paris is based on his own experiences as an activist in the 1990’s, but he adds a fictional love story that makes his account of the pandemic in France that much more personal and highly emotional.

The story starts at the Group’s volatile weekly meetings (WM) where the leaders insist on a rigid procedure so that they can get through their usually packed agenda.  Everyone participating is fueled by anger and frustration, and they are passionate about getting the Authorities and Pharmaceutical Companies to actually take stop stalling and take some action as the current early regime of drugs are proving useless at keeping the Virus from being fatal.

As figures are released showing that the rate of new people being diagnosed as HIV+ are higher in France than any other European countries at that time, and many of the Paris collective see their T Cell counts drop down to to dangerous low levels quickly, the need to take action takes on a greater urgency.

At the WM’s there are plenty of heated discussions on what form of guerrilla actions they should take to not just get their case across, but to also force the hand of both Mitterand’s inactive Government and the reluctant Drug Companies.  The cast of characters include Thibault (Antoine Reinartz) their articulate leader who along with Sophie (Adèle Haenel) one of the organizers, prefers a more diplomatic approach to how they should carry out the group’s avowed aims.  This however does nor sit well with more militant members such as Sean (Nahuel Pérez Biscayart) who want to adopt more aggressive and confrontational tactics which they firmly believe is the only way to make the Authorities take them seriously.

Sean’s passionate determination attracts the attention of Nathan (Arnaud Valois) one of the group’s newest members, and one of the rare ones who is HIV negative.  Whilst the first half of Campillo’s drama focuses on the trials and tribulations of the ACT UP group and their activities, the latter part centers on the romantic relationship of the two men as they first become lovers, and then eventually as Nathan takes on the role of carer as Sean ‘s health rapidly deteriorates.

Campillo so perfectly captures the bewilderment of a community that struggles hard just to stay alive and abreast of every single development such as new reactions to the existing regime of AIDS drugs which were proving so ineffective. This was the era immediately before the advent of the arrival of protease inhibitors which would finally change the playing field for nearly everyone who had been diagnosed HIV+.   It is however the sheer authenticity of his script that makes this such a chilling and painfully disturbing film to watch, and by including the story of Nathan and Sean’s brief but intense relationship, makes it also devastatingly heartbreaking .

The cast most of whom were born after this period are pitch perfect in their portrayal of the indignant dying youth, particular the two lead actors. Valois as the slightly mysterious and compassionate Nathan was a real revelation, even more so when you discover that he had given up on acting a few years ago to focus on being a masseur. 30 year old Argentinian actor Pérez Biscayart playing Sean may not have looked his age, but he had this piercing intensity that made his superb performance so utterly compelling.

Campillo’s shockingly brilliant movie deservedly swooped up 4 major awards when it premiered at the Cannes Film Festival earlier this year. However the accolade that it would be honored for, and which in many eyes is even more important,  is the fact that Campillo gives us a telling of this crucial part of our history actually through queer eyes, something that Hollywood would never dare to do.