I guess this new hip, slightly grubby, apocalyptic indie movie could be classified as ‘mumblecore* plus’ i.e. it’s a tad more professional (despite the minuscule budget) and more accessible than others in that genre. 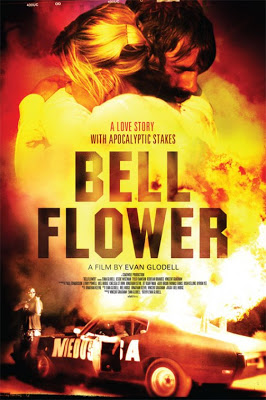 It’s about two young men barely grown up who are best friends, good looking, immensely personable, very funny and quick-witted, and who are obsessed with everything ‘Mad Max’, and they fantasize about building their own flamethrower so that they can go on a rampage.  Living in a decidedly un-glamorous part of L.A., neither Woodrow or Aiden seem to have jobs so when they are not building their  ‘big toys’, they party hard, hang around in bars and pick up girls. Woodrow, sensitive and somewhat girl shy, hits it off with Milly a tough funny blond and they take off on a madcap road trip to Texas for their first date.
When the tender romance turns sour, so does Woodrow, and the mood turns from sweet to sheer violent. By then the boys have not only perfected the flamethrower but have souped up an old car with them installed too, and have created a four-wheeled monster that they can reek pyrotechnic havoc with.
The disappointing ending kind of loses the plot and me, but up till then I loved it.  Essentially because of the remarkable and natural chemistry between Woodrow and Aiden which is probably the closest two straight men can ever get together.
Like other movies of this genre you can sense the sheer energy of the filmmaker … this one Evan Glodell in his debut, wrote, directed starred and even built the two cars himself!  Wow …. this boy has some talent … as well as not being totally unpleasant to look at (!)
If you have a taste for indie movies of the future, then this is definitely one for you.
* mumblecore = a genre of low-budget movie using non-professionals to depict mundane post college or early adult existence