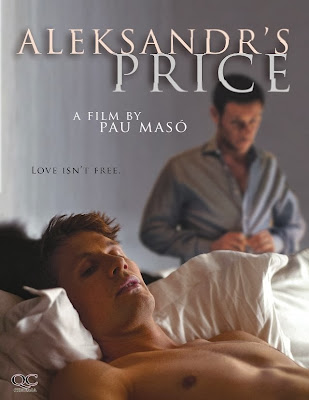 Aleksandr is a young Russian illegal immigrant living in New York who is suddenly penniless and left to fend for himself when his severely depressed mother takes her own life.  In desperation he turns to Emma his only friend for help and she sends him off to meet a contact of hers to see if he can give him some work. Aleksandr’s luck is in. Sort off.  He is an attractive man so he gets offered a job as a near naked go-go boy in a bar, which one night leads him to being picked up by Keith, a much older man, who takes the boy’s virginity.  Next morning as they are about to leave Keith hands him $500.  He’s assumed that Aleksandr is an escort, whereas the naive Russian had assumed that he had met his first boyfriend, even though he’s not even sure that he is gay.
The wide-eyed innocent lonely Aleksandr seemed to have lacked any real personality before this but now once he overcomes his initial reluctance, he embraces his entry into the dark world of prostitution with relish. The ‘clients’ are nowhere as nice as Keith and their demands get more bizarre and very dangerous. However, even when Aleksandr is offered more and more money, its the human contact that excites him most as he desperately seeks out any sort of emotional commitment from his Johns. 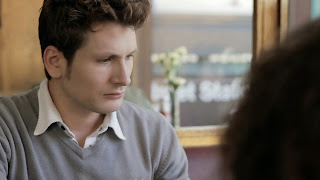 We learn his entire story from a session he is having with Dr. Mary a psychiatrist, and the reason that he has finally turned to ask for help is because of an extraordinary freakish turn of events that adds a really uncomfortable and totally unexpected twist that has made him realised the error of his ways
This rather heartbreaking sad tale is the work of a remarkable young Catalan filmmaker Pau Maso who co-directed/wrote/edited/casted and starred in it too. He is a fine actor and was intensely realistic as the protagonist with a seemingly perfect Russian accent.  It’s a powerful and very honest story, albeit with one two many cliches in the actual script, and whilst its not one of the rare films on gay prostitution that Maso naively thinks it is, it is at least one of the better ones.
There has been a tendency to compare any movies nowadays that contain sex-addiction to ‘Shame’ but the similarities are few in this instance as Mao’s movie is completely un-erotic.  And even odder for a ‘gay’ movie, it has no full nudity.