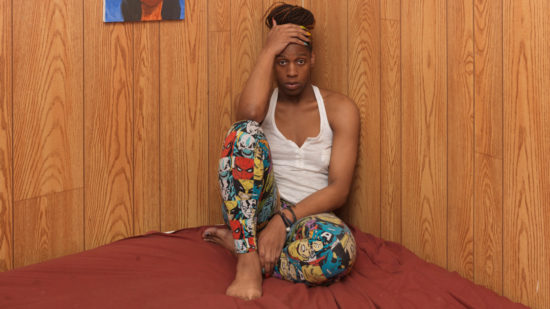 With the sad news this week about the death of Alphonza Watson in Baltimore which brought the number of transgender women of color in the US killed in the first three months up to 8 now, the story of CeCe McDonald takes on an even greater significance.  A compelling new documentary from Jacqueline Gares doesn’t just tell what brought CeCe to national attention, but it also focuses on the plight and dangers that trans-women face on a daily basis.

In 2011, Cece and three of her friends were attacked in the street by 4 people who had started off making racist and transphobic taunts and  then one of the women attacked CeCe in the face with a broken glass causing a large bleeding gash. After this one of the men came after CeCe and tried to attack her, and so she took a pair of scissors out of her purse and turned around to face him, and he was stabbed in the chest and died from the wound.

From the word go, the Minneapolis authorities refused to accept either that CeCe had been defending herself, or that she was in fact the victim of a hate crime.  They charged her with murder, but after an enormous public outcry that spread globally, CeCe was offered a plea bargain to second-class manslaughter which she was coerced to accept and for which she was jailed for 41 months. Made to serve out her time in a mens prison, and for a large part of the sentence, CeCe was put in solitary confinement.

Her supporters never eased up on their campaigning and by this time they included the transgender actress and LGBT advocate Laverne Cox (who also acted as an Executive Producer for this documentary) who was there to greet CeCe on her release and to help propel her to the next part of her life.

The second part of the movie starts with the background story of CeCe’s upbringing and family which would have been much useful for us to help understand her more if we have learnt all this earlier.  The reunion with her mother and also her siblings was, like most of this story, was highly emotional but still odd that none of them had featured in the campaign to get justice for CeCe.

Over the next few years we see an uneducated CeCe develop into an articulate spokesperson for trans women of color as the community looked up to her as an example that they wanted to aspire too.  CeCe was the rare one of their number who hadn’t been killed when she was attacked, but she stood up for herself and fought back and survived.

As she finds herself in demand as activist and a motivational speaker, we get to learn of the real risks that trans-women, particular those of color, have to deal with on a daily basis. Even if we had an idea about these before hand, seeing and hearing about them first hand by members of the very community, is both a shocking and sobering experience.

The second part of the movie lacks some clarity and direction, but it’s hard to fault a documentary that covers such a highly emotional subject, and anyway it makes up for it in part with some excellent interviews like that with the iconic 1960’s activist Angela Davis.

You may need a box of tissues when you watch this one.